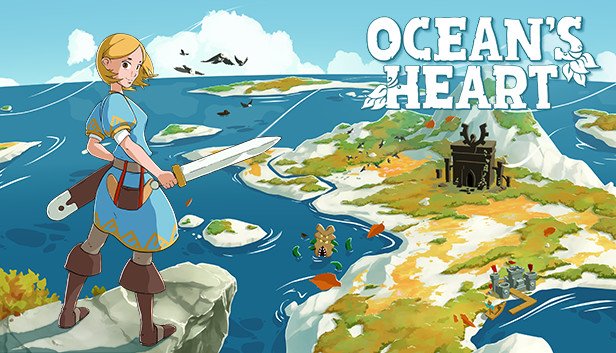 Available on PC and Nintendo Switch

Oceans Heart is an Action RPG developed by Max Mraz and published by Nordcurrent Labs. it’s out now on Nintendo Switch and PC, here’s a bit more about the game-

‘Ocean’s Heart is an action RPG featuring detailed pixel art with a heavy focus on exploration. In a lively world teeming with secrets and mysteries, Tilia sets out in search of her missing father. Follow the trail through the ruins of a flooded kingdom, shape the future of the current world, or keep your head down and focus on your own mission in this epic retro-inspired adventure!’

Zelda eat your heart out here, Ocean’s Heart takes inspiration from the hit Top down rpg of old and delivers a brilliant artstyle that pays homage to the classic. It’s a bright and vibrant world you play through and everything is beautifully crafted. Players of the hit classic will be awash with nostalgia, it’s stunning.

Again with its retro inspiration Oceans Heart has plenty of zelda-esque audio with a delightful soundtrack as you go on your adventure. There’s no voice acting but the speech is well written. All round a very authentic experience.

You can’t help but mention the original when you mention gameplay. Even though it’s top down some enemies will still be able to jump out at you creating a bit of a challenge but generally most enemies can be beaten with some frantic slashing. Some enemies do need some tactics but most are manageable.

There’s plenty of puzzles too with my 4 hours of gameplay only scratching the surface of what’s on offer. The puzzles do require some thought and you really have to be patient, on a few occasions having to retrace my steps in order to work out where I went wrong.

You play as Tilia who sets out to find her father after an attack on her home village. It’s a rather cliche storyline but it’s a more than decent introduction in order to set you off on your quest, as you head off you can do far more than just follow the main quest and I think that’s where Oceans Heart really shines. There’s plenty to explore and do within the world and the ability to go off and create your own quest will appeal to many.

A wonderful retro inspired RPG that will appeal to many fans of the Zelda series or new players looking for a new spin on an absolute classic. Oceans Heart does an excellent job of creating a world that has plenty of opportunity for exploring and questing, the game looks beautiful and I had a fantastic experience.