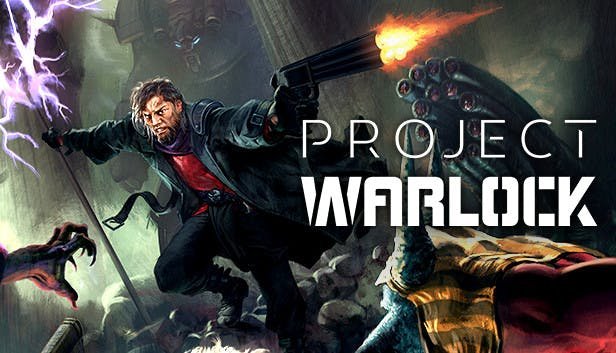 Project Warlock is a fast paced first person shooter developed by Buckshot Software and published by Retrovibe. It’s out now on pc, here’s bit more about the game-

‘One man and his guns. Become a mysterious Warlock who embarks on a dangerous mission to eradicate all evil. Put your finger on the trigger and travel through time and space to wreak havoc like in the golden days of fast-paced, adrenaline-pumping first-person shooters, hooking you for hours of super fun carnage. Let’s rock and roll!’

Project Warlock is a love letter to shooters of old, so with that the retro art style from the 16 bit era, but maximised by today’s hardware. Project Warlock looks wonderful, great textures, varying environments and amazing looking enemies get you in the mood to hack and blast your way through the levels.

Audio is very Doom-esque with grungy dark tones complimenting the gameplay really well. Various enemies make various sounds as you encounter them also to really add a strong sense of atmosphere as you go flying through the levels.

Strong Doom vibes once again with the fast paced hack and slash gameplay, tight spaces that you fight in and various enemies you encounter. Gameplay feels fluid and very responsive and hacking and blasting my way through the levels was really good fun. As you progress you can upgrade you and your weapons. Upgrades are pretty simple and it’s more just in addition to, it’s there but you’re really here for the hacking and shooting, and nothing should take away from how well this game plays.

Project Warlock is epic. It’s the sort of game that gets me out of bed in the morning and eager to fire up the pc and play. The fast paced hack and blast gameplay is the key to the game and it does that really well. Fantastic fun if you’re a doom fan and fantastic fan if you’ve never played before. Give it a go.