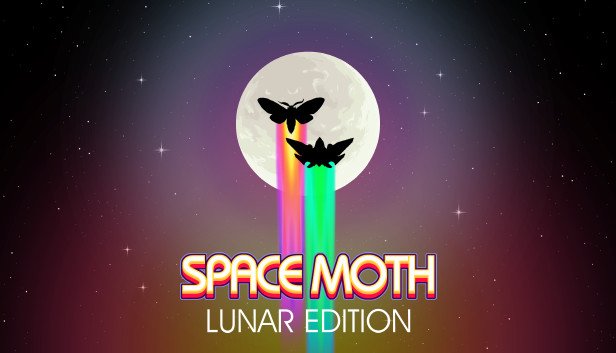 Space Moth is a top down Shmup or Shoot em up Developed by 1cc Games. It’s out now on pc, Nintendo Switch, PS4 and Xbox one. Here’s a bit more about the game

‘Space Moth: Lunar Edition is the ultimate version of the beloved cult classic. Vivid visuals: from reworked nocturnal backgrounds to new enemies and particle effects, graphics have been enhanced to give Lunar Edition a distinct style and flair of its own.’

Shmups are my jam. If I’m having a beer one evening I’m also playing a shoot em up, it has to be good looking  and noisy and Space Moth has bucket loads of it. Everything is really bright and it gets really hectic when there’s loads of enemies on screen. A proper shmup experience. The enemies look fantastic and there’s some pretty awesome explosions. It may seem simple but for a good Shmup they are the two main ingredients graphically. There’s a great soundtrack that accompanies the game and that is paired with great sounds from the weapons. Space Moth looks and sounds fantastic.

Fast and frantic is the order of the day. Shmup die-hards will adore the way this game plays. Your hit box is well displayed and that helped me no end when it came to dodging the masses of enemy fire being rained down upon me. New players get some help too, practice mode and a how to play guide makes getting into the swing of it easy. But new players to the genre may be a little overwhelmed initially.

Two Different ships to choose from each with their own stats and traits, The Space moth is your all rounder while the Hawk has a better laser but sacrifices in speed. so choosing between the two does depend a little on how good you are at the game.

There’s also some nifty side art for either side of the screen as you play, because the game doesn’t take up the whole screen there’s plenty of room for some pretty neat interchangeable art which looks really good.

Loud, Vibrant and fast paced. Shmup die-hards will find it easy to jump in and love Space Moth. Although there’s practice and a how to play tutorial for new players, there may be a steep learning curve for those new to the genre.