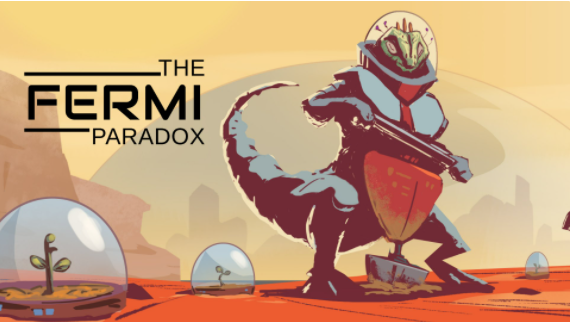 The Fermi Paradox is a Strategy/management game developed by Anomaly Games it’s currently in Early Access and since the game is not yet complete i won’t be giving it a score, here’s a bit more about the game-

‘The Fermi Paradox is a choice-driven narrative strategy game in which you’ll guide alien civilizations that can thrive or simply survive through the ages, picking up radio signals from distant stars and finally making contact with one another by exploring the furthest corners of the galaxy.’

The Fermi Paradox presents a different and very intriguing game for you to play, you’re essentially a galactic gardener as it’s rather elegantly put, shaping the galaxy and fostering new life forms, shaping their future or creating their demise.

There’s a lot to think about too when it comes to developing your life forms in the galaxy, you need to carefully balance the cultural development of each species and trade off with picking up synthesis flares for when the big decisions come, and as you progress through the game they start to fly in thick and fast!

Being entirely text based there’s no in game narrative other than what you read, each moment then comes with three choices and you must choose what suits the development of that species best, does the species need more resources? A boost in cultural development or a push to that next new age. All have to be thought about and traded off with collecting synthesis. Because not enough synthesis for a big moment and it could be all over.

As it currently stands The Fermi Paradox while simple is an incredibly interesting and engaging game to play, don’t let the text based nature of the title put you off because the game plays incredibly well and really kept me hooked to see what happened to the ODO space voyage, or what happened when the Prun landed on another colonies planet. The scenarios are really well written, and accompanied by great drawn images that really help set the scene, along with that there’s some fantastic audio that goes a long way to convey the situation.

Overall The Fermi Paradox is an extremely interesting game even at this point in early access, the path you take as a galactic gardener is entirely up to you, and with ever diversifying scenarios the Fermi Paradox represents an incredibly exciting and interesting game to play. If this were the finished product it’d score 8.5/10 easily. I’ll be sure to revisit.