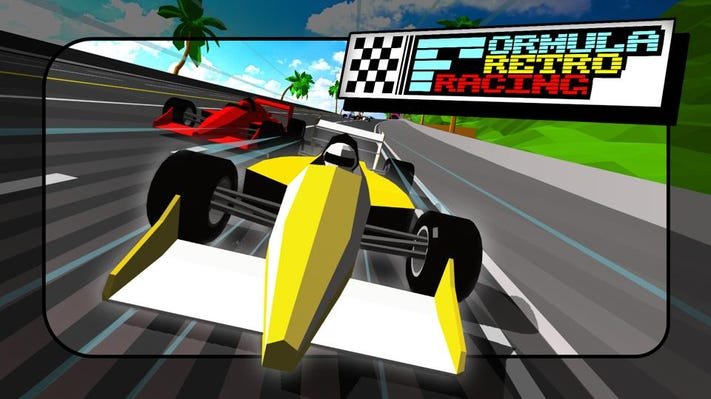 Formula Retro racing is an Indie racing game developed and published by Repixel8. It’s out now on all platforms- here’s more from the developer-

Featuring the fast and exciting gameplay that the genre is known for, Formula Retro Racing captures the essence of the old school racing games with crisp low poly visuals, retro soundtrack and high speed action.

Race through a diverse range of tracks across various game modes to beat your personal best times and compete in the Formula Retro Racing leaderboards.’

Graphically FRR hits the spot, you immediately get the 90’s arcade racer vibes immediately and the colours and cars all have that incredibly retro aesthetic alot of us now crave. Tracks are also the same with blocky 3d tracks and environments giving you a real retro vibe.

The racing in FRR is really good, it’s an arcade style racer but it feels good cars lean into the corners and there’s realistic-ish drafting, catching a speed boost off your opponents before timing your pass just right. Although it’d be better if drafting gave you a fairer advantage rather than killing your speed off as soon as you pull out.

Damage is something to manage during your race and you have to really be careful, sometimes the slightest knock or graze can result in more damage than you bargained for. Fill the meter up and hit the wall again and you get a rather good looking crash, with parts flying everywhere. You do respawn pretty quickly and sometimes it gives you a slight advantage but otherwise it’s a good racing experience that’s challenging and enjoyable.

Three different modes, Arcade, Eliminator and grand prix. I really enjoyed them with grandprix being my favourite, it would’ve been nice though for the tracks to be pre selected and also pre select a difficulty for the whole tournament. I also really enjoyed the eliminator but it would’ve been more enjoyable if cars were actually eliminated with each lap just so there’s more of an end point. I think I got to around 28 laps before thinking that I’ll have to give up here.

Formula Retro Racing as a whole is a very good game, you’ll get plenty of enjoyment from the gamemodes and the look and feel of the game is fantastic, there’s just little things that could do with changing ever so slightly in order for the game to be better in my opinion.