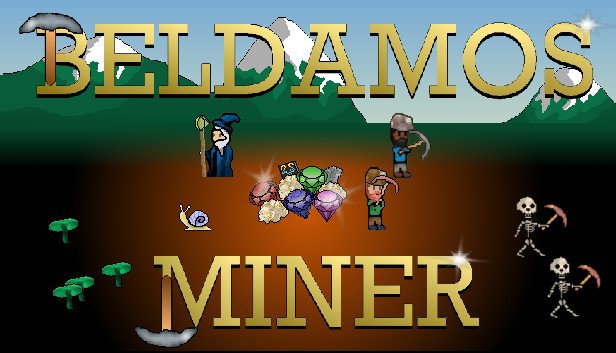 Available on- August 18th via Steam.

Beldamos Miner is a side view mining-RPG Developed and published by Beldamos Games LLC. It’s set for release on Steam on the 18th of August. Here’s a bit more about the game.

‘Beldamos Miner is a mining game, where you hunt for ore, buy upgrades, and explore. It starts out in a simple world that has an air of familiarity but as you progress in the game, you’ll find a more complex and interesting world unfolds. Mine ore, learn spells, buy upgrades, and finish quests!’

Being the first game from a developer, Beldamos Miner is a simple and to the point affair graphically, there’s no frills but it gets the job done with little fuss, the characters are neatly drawn and the town you visit to sell your found resources is simple but still a nice place to be. The Mine itself has simple resource blocks drawn into the dirt. It’s all simple but it’s effective and gets the job done.

The premise of the game is simple. Dig for ore and other gems and sell them to upgrade your character’s main tool, his pickaxe. As you progress you begin to take on quests and even learn about ancient magic. For a game that is predominantly mining you see an awful lot more and it’s incredibly good fun for such a small game.

There’s a decent variety of enemies that you encounter and the environments are ever changing as you progress. Which given the small development team behind the game, its very impressive that such time has been taken to go into depth.

It’s a very simple title, but Beldamos Miner comes out punching as another small developer looks to find their way in the industry. There’s some really good ideas on display and despite its simplicity I really enjoyed the quests as well as the core mining element of the game.