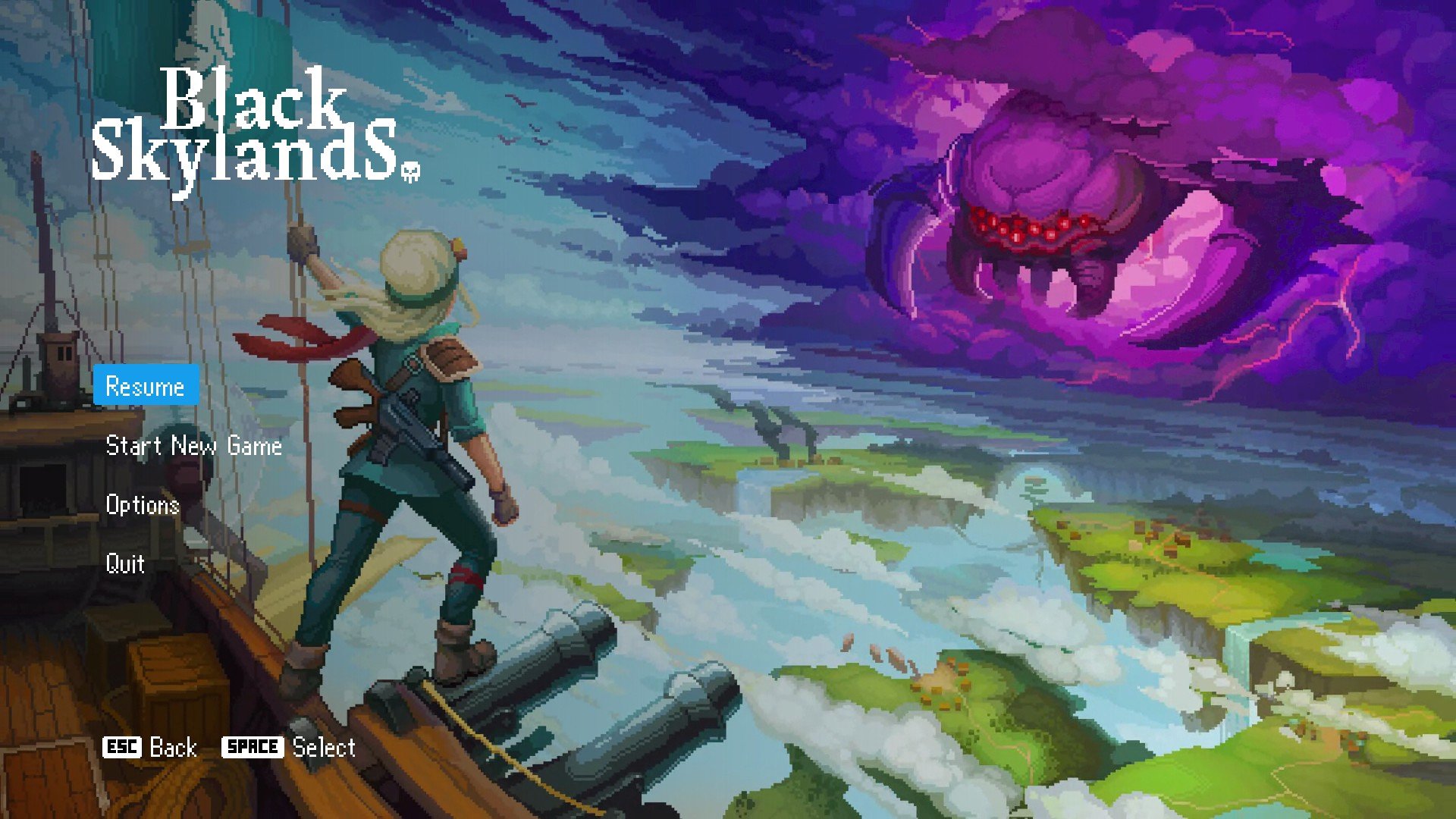 Black Skylands is a Top down open world sandbox game developed by Hungry Couch Games and published by Tiny Build. It’s out now on steam in early access Here’s a bit more about the game-

‘Build your skyship and explore the open world, fight factions of pirates and monsters, claim your territory by foot or by your flying vessel. You’re the captain and the sky’s the limit in this skypunk Open World action adventure!’

Top down sky views and it feels like the GTA games of old but set high in the sky. Everything has a 16 bit style to it and black skylands looks absolutely fantastic, the craft you fly in looks great and the environment you fly in and the islands you explore are really solid and look fantastic. It’s been really well thought out and well presented. There’s no voice acting for Blackskylands but more like a Fez style Murmuring as you read the dialogue. Plenty of audio as you travel around though and loads of ambience, it’s a great sounding game, when you get into combat the game gets even better, really good looking and very immersive.

There’s a lot to take in with Blackskylands, it’s an open world sandbox with some RPG elements so there’s  plenty to build, explore and upgrade as your character develops. Flying around is pretty realistic, Your craft is characteristically sluggish by design as you rather haphazardly navigate it through the skys, it feels very realistic and just flying can be a bit of a task at times.

The character movement is very crisp when you get used to it, being top down it can be a little difficult at first to quite realise where your character is pointing, but I think that’s mostly because I don’t play many top down games. I love the grappling hook because it can either be used as a weapon or a way to get yourself out of danger (i found the danger pretty quickly)

Capturing new lands to help expand your colony is one of the key elements of the game, as your colony grows you gain new resources, research and obviously expand your influence over the lands.

Finding lands to capture is important and exploring is a key element of that, there’s plenty of islands to explore with chests, secrets and plenty of bad guys to fight. As the story progresses you’ll also have boss fights with their special powers. The map gives you key information about the island so you know what kind of fight you’re heading into, so you don’t ever feel like you’re walking or flying into a fight you can’t handle.

Crafting is pretty solid in Blackskylands also, with weapons, armour, powers buildings and your ship all having craftable parts and upgrades. You require resources in order to create these upgrades, parts, weapons and buildings and these are either found as you move from island to island or as you explore islands themselves. It’s a simple system in place and easy to grasp, nothing is over complex nor difficult to grasp and I found myself comfortable with all aspects of the game within around an hour of getting started.

The story is pretty good, and well told even though there’s a lack of voice narration. You take the role of Eva on this adventure and you seek to avenge your father and the damage to your fathership by the raiders, Raiders aren’t your only problem though as you will find out. It’s a good story and it compliments the game well. I won’t spoil anything further.

Blackskylands is not to be missed, it’s incredibly ambitious and it hits the target. The storyline and gameplay are fantastic and the environment you play in is beautiful. There’s plenty of depth with crafting and upgrading and it’s all rolled together beautifully to create a fantastic experience. Must play.