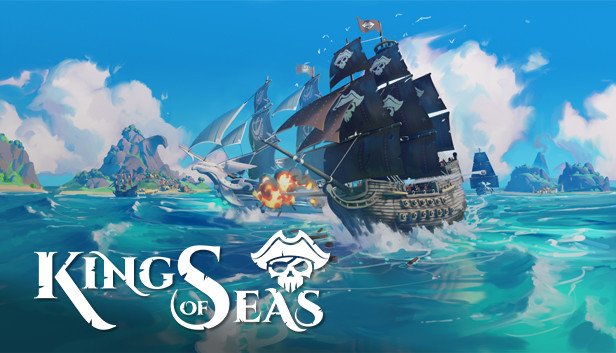 King of seas is an action adventure game developed and published by 3DClouds. Its out now on steam, here’s a bit more-

‘King of Seas is an Action Role playing game set in a deadly procedurally generated pirate world. In a ferocious plot you will fight to regain what has been taken away and embark on an epic adventure in a fantastic world, filled with battles, lost islands and treasures. A universe full of amazing characters and breathtaking missions will keep you anchored as you strive to become the king of all pirates.’

Top down once again and King of Seas looks good at this angle, although there’s no zoom and you can’t turn the camera. Otherwise the game looks great with fantastic little islands and landmarks dotted around, the ships look great and you really feel like a pirate as you hear the waves crash and the pirates of the caribbean-esque music blast out. It’s all very immersive.

The story is somewhat surprising, you can take on the role of either a male or female character, said character is coming of age and ready to take command. However when you return you’re framed for the death of your father and your ship is sunk, alas pirates come and rescue you and you in turn become a pirate to find out what happened and avenge your father.

I didn’t expect such a storyline and actually it was quite a good setting for the game. Once you’ve completed some basic tutorial stuff you’re then unleashed into the high seas to complete missions and improve your vessel.

Despite the lack of control over your weapons, combat isn’t as difficult as you’d think. Lining your ship up for an attack is simple and you hold the trigger for the side’s cannons you want to fire, it can get a little confusing at first if you’re constantly turning your ship but once you’re used to it it’s pretty simple.

Upgrades can be found at docks along with new ships, you can upgrade just about every aspect of your ship and these upgrades are relatively cheap. You can also pick things up along the way to equip or sell for a profit. You can also buy and sell at the market in order to boost your gold. That aspect is good and being able to trade with other islands with differing economies means that you can still make plenty of profit.

You don’t discover the map as such, you have to find the local cartographer who, for a fee, can give you a map of the area around him, which is a nice way to do it differently, but I found myself more interested in saving my gold to try and upgrade as much as possible. Plus 1000 gold felt expensive.

There’s one or two downsides to the game, it is very grindy. You’ll be working hard to build up to buy bigger ships. Also the other ships around you tend to be of a much higher level. This does make taking down the enemy a bit of a job, even though they aren’t the smartest when it comes to fighting.

The only other point I’d like to make is that at the moment there’s no mouse support, however it is coming eventually, so if you don’t have a controller just make sure that the mouse support update has been rolled out before you purchase.

If you do have a controller I wouldn’t worry, the game still plays well and I had no problems navigating the seas.

King of Seas has a good buy and sell economy, it looks great and controlling your ship is surprisingly good even with a lack of mouse support for the moment, the story is a bit of a surprise in a good way. It’s a bit of a grind and for some this will be off putting while others will relish the challenge of conquering the high seas!