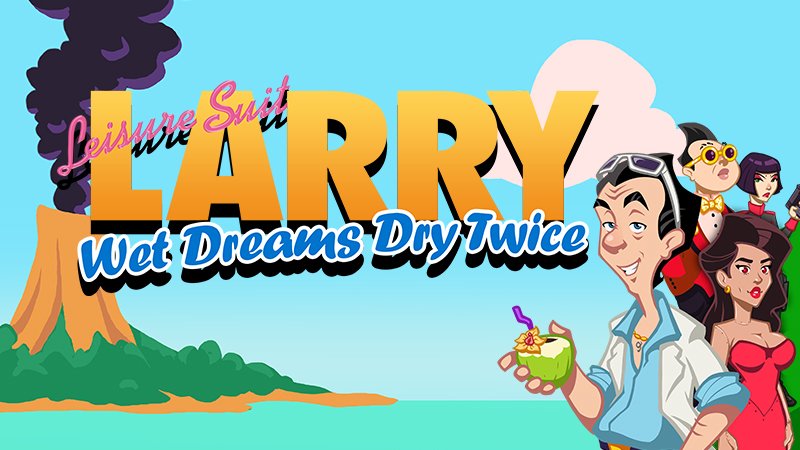 ‘Hey Ladies, it’s time to get wet again! I am not done yet and still dreaming of you in Leisure Suit Larry – Wet Dreams Dry Twice. I left New Lost Wages, stranded in Cancum, and had prepared to marry my only true love, Faith. But, unforeseen events interrupted us and we’ve become separated again! She is somewhere in the famous, sunny and huge Kalau’a archipelago and I have to find her. Help me — if I don’t find her soon, I think I may burst!’

The environment in which Larry’s adventure takes place is incredibly bright and vibrant, it’s filled with innuendo’s and little jokes here and there. The cartoon style of the game fits well for our humble hero. Voice acting is solid also with plenty of jokes and one liners dotted throughout. Some of them land well while others do occasionally miss the mark or feel a little awkward. But that’s to be expected as not everything will be to taste.

The story is solid, with Larry’s wife, Faith, lost and it’s up to Larry to find her in the huge Kalau’a archipelago.  Larry’s point and click adventure consists mostly of finding items and completing puzzles in order to progress to his love. Puzzles which largely make sense, i won’t ruin too much but as an example. Using the lubricant on the meat grinder handle means it’ll work again. The puzzles aren’t overly complicated but do get more difficult as you progress.

The characters you meet as you progress are all well acted, conversations with these characters are good and you can find ways to progress through conversation which is also nice, you don’t feel like you’ve wasted your time speaking to random NPC’s when you come across them.

Combining items and using them is pretty simple. Using your inventory you can find out what items are and combine them if you need to. From your phone you can find what quests you need to complete and even use a blueprint app to create items to progress you even further in the game. Point and click games can get a little dry when you’re stuck but holding down the space bar shows you all the interactable items in that area and it honestly makes things much much easier. It keeps the game flowing when you’re stuck.

Leisure suit Larry – Wet Dreams Dry Twice is a bold no nudity game that has good puzzles, some funny moments but ultimately a solid point and click adventure in a wonderfully drawn world. The lack of nudity in the game will annoy die-hards but to everyone else it’s another good outing for Larry!