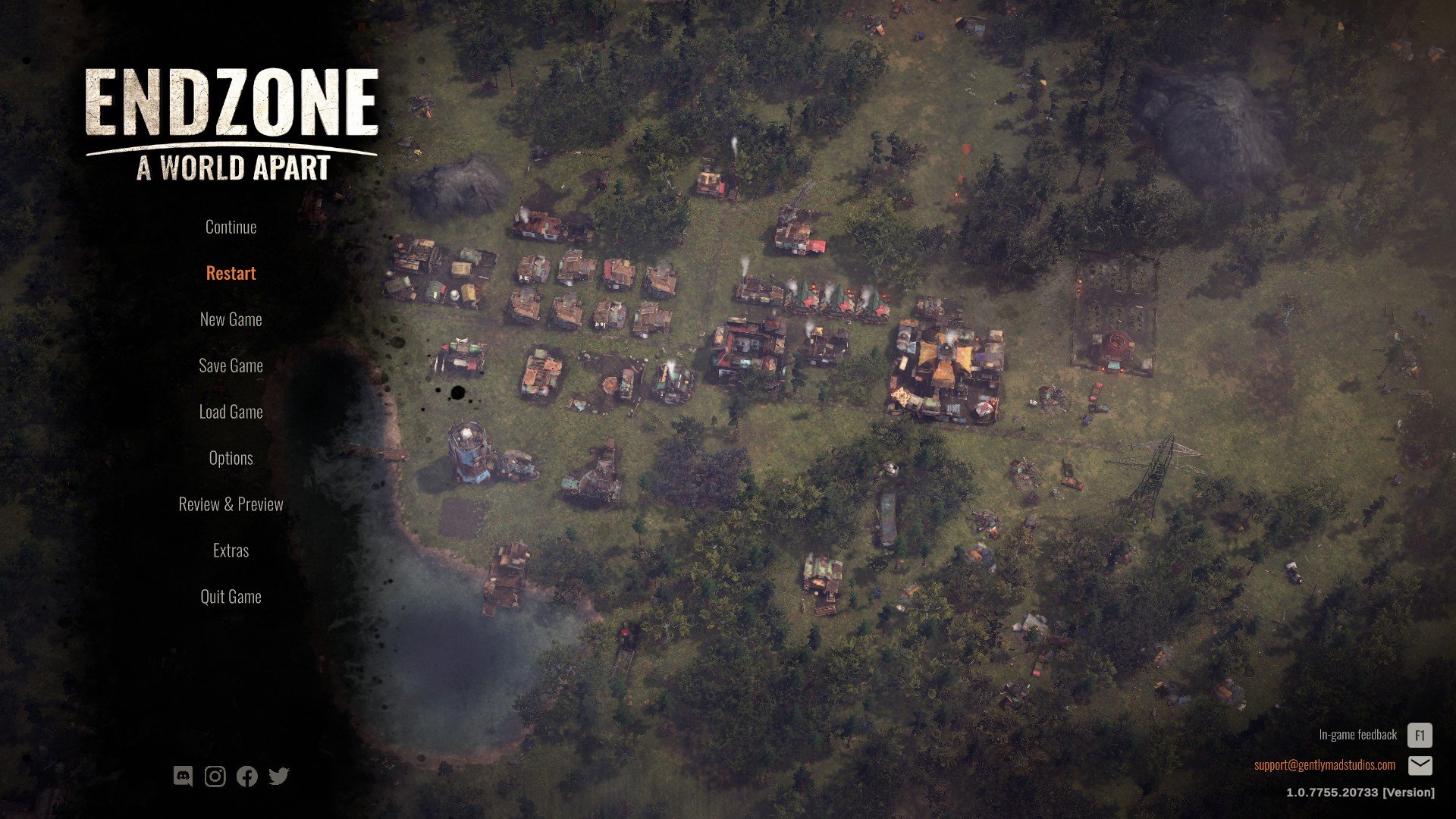 Endzone- a World Apart is a Post Apocalyptic Survival / city builder Developed by Gently Mad Studios and published by Assemble Entertainment. It was released on 18th March 2021. Here’s a bit more from the Developers

‘in 2021, a group of terrorists blew up nuclear power plants around the world and plunged the world into chaos. Only a few were able to escape into underground facilities called “Endzones”. 150 years later, mankind returns to the surface – under your command! In an extremely hostile environment full of radioactivity, contaminated rain and extreme climate change, you’ll have to prove your worth as a leader.’

Graphically, Endzone is a very good looking game, from the top down perspective the environment your placed in is really good looking, it’s also diverse, with seasons affecting the environment your city is built in. During droughts the land becomes dry and rivers dry up. And when the rain returns you gradually see life return to the land. Better still as you develop your settlement and improve the buildings you genuinely see improvements within the buildings and your city genuinely grows. Ruins are also dotted throughout the map along with scrap, these ruins all fit the post apocalyptic world well and it genuinely looks good. I really really like the amount of depth that’s gone into the world of Endzone. It looks great.

Voice acting is mostly in the tutorial. It’s great too because with such a long tutorial the voice narration helps keep you involved and learning about how the game plays. Standard background music accompanies the ambient noises from the environment, particularly when it rains or you’re near a building. All adds well to the immersion.

Point and click reigns supreme here, with everything at the click of a mouse button learning the basics of how your city works is easy particularly with the long and in depth tutorial showing you just about everything you need to know in detail.

Stats and data on your city are easy to find and interpret, a menu shows you what settlers have which jobs, efficiency of each building is found by just clicking the structure and if that building has multiple options for production or gathering, then the options are displayed clearly. The interfaces are easy to use and really make you feel comfortable playing the game. You can upgrade buildings and the information on resources you need and build time is also displayed clearly along with any route maps for settlers. This means you can see exactly what’s going on in great depth.

The story is somewhat cliche, with terrorists blowing up multiple nuclears plants around the world and plunging the world into a nuclear winter for around 150 years. As humanity returns to the surface under the command of you and your job is to rebuild humanity. It’s very stereotypical of the genre but it gets the job done and sets the scene for what is really deep and enjoyable gameplay

Endzone- A world apart is a thoroughly enjoyable city builder that doesn’t plunge you in at the deep end. There’s great depth without becoming too complicated, a genuinely great title to play whether you’re new to the genre or a seasoned city builder!

Still can’t believe I managed to snag an import

I picked up road trip adventure in the Ps2 purely

Christ did I play this game FAR too much. I was sh

I absolutely love the warriors. I didn’t play it

Got this game the Christmas it came out and though