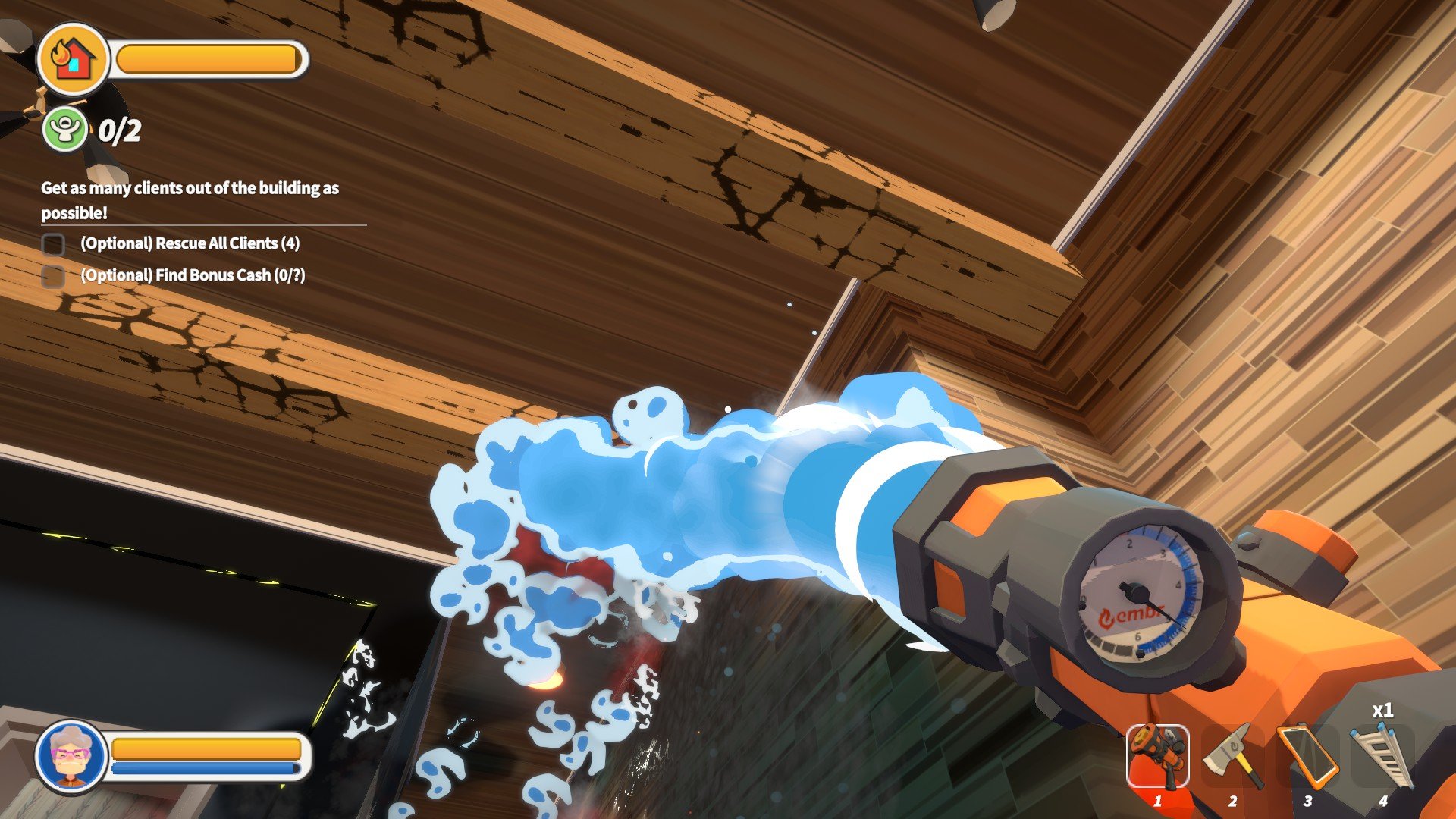 Taxi? Uber! Food? Deliveroo! Firefighter…99…what? Embr is what happens if the gig economy spreads as far as uber-ing a Fireman to save you! It’s hilariously good fun whilst taking a real stab at the gig economy. The game is published by Curve Digital and Developed by Muse Games. Here’s a bit more-

‘Join Embr, THE Emergency Services Revolution, and become an Embr Respondr™ today! Fight fires and save lives while climbing the ladder of success, all within the comfort of flexible working hours. Embr’s mission is simple; bring über fire fighting to everyone, everywhere.

It’s time to redefine the firefighting service paradigm and give the power to you – the people – and we’ll take care of the pesky paperwork. Everyone should have the opportunity to be a hero, and that’s why with just one simple payment, you can become a Respondr™ today!’

Embr is low Poly, to add to the comical style. Despite that things look pretty good, buildings slowly collapse dropping debris and flames spread in the way that they should. It’s a game that’s having a dig and the graphics really convey the funny side of it.

Audio is more of the same to help convey the funny side of the game. There’s absolutely nothing serious about any of this and from the word go with the tutorial the game shows its comedic value.

The main objective is to rescue a set number of civilians before the building burns down, there’s also other objectives like rescuing all the civilians and collecting secret bundles of cash hidden around the buildings. As you set about your job there’s various hazards in your way including, the fire itself, electrical outlets and broken wires that could electrocute you, doors that may or may not explode as you break them down. Furniture  and other objects left around that’re in your way also as you traverse the buildings in search of fires to tackle and survivors to rescue!

It’s all good fun, there’s a real emphasis on the jokey nature of Embr, the idea is to just do your job no matter how badly you do it, after all they’ve used Uber for their firefighting needs. And that’s where the fun is to come in, even by yourself you feel like you have to do things quickly and that has disastrously funny consequences, play with a friend and it’s only going to get funnier!

Another great element is the challenges, escaping a building in the time limit is mighty good fun and breaks up the repetition. Complete puzzles and find hidden switches to progress to the exit point and escape. It’s all very frantic and a lot of thinking on your feet is required in order to escape.

Completing tasks earns you money, the money is used to get more items and equipment, or improve your vehicle. The additional equipment will help you in being able to scale hazards and fight fires more effectively.

There’s plenty of replay value here too, there are multiple different ways to rescue the victims, money is hidden randomly every play and just the addition of another player will keep Embr fresh.

Just get it done!

One of the most enjoyable aspects of Embr is the ‘just get it done’ nature that comes with being an Embr Respondr. Throwing victims into the safe area whilst also skulking round pocketing cash and anything else you may find is both hilariously good fun and a constant reminder that emergency services are incredibly important! Throwing a Survivor into the safe area almost became a sport with me throwing people from buildings and over fences in order to achieve my goal.

Embr is a fun game based around the idea of the Gig economy spreading to Firefighting. Its funny and laid back style means there’s just fun to be had either alone or with your friends via multiplayer. Challenges add another dimension to the game and keep you entertained. A really entertaining game that shouldn’t be missed