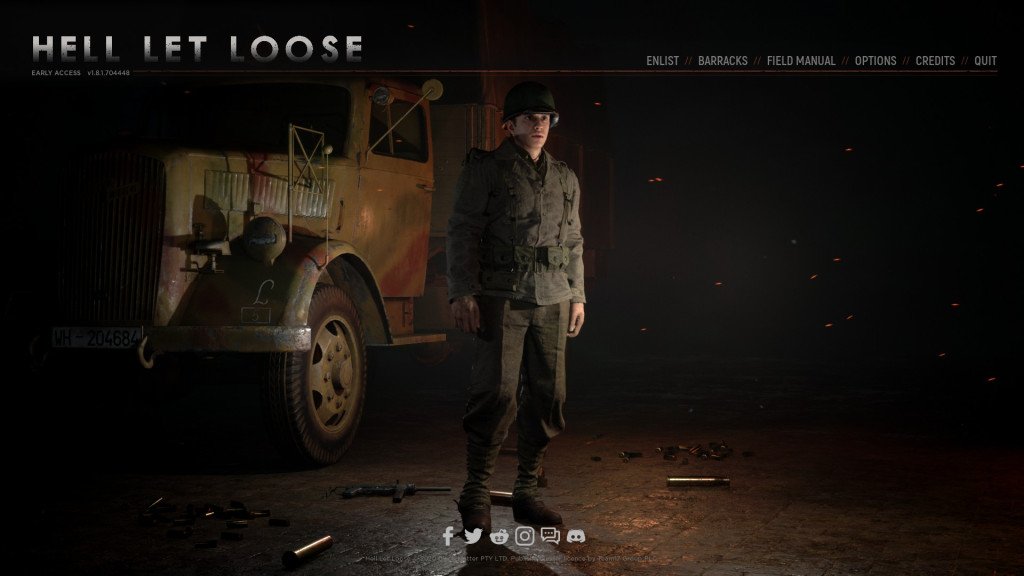 Hell Let Loose is a FPS like no other. Developed by Black Matter Pty and Published by Team 17. Hell let Loose takes what you thought you knew about first person shooters and throw it in the bin. Here’s more about the game-

Fight in the most iconic battles of the Western Front, including Carentan, Omaha Beach and Foy and more. This is combat at a whole new level….with lumbering tanks dominating the battlefield, crucial supply chains fuelling the frontlines, you’re a cog in the machine of colossal combined arms warfare. Hell Let Loose puts you in the chaos of war, complete with deep player-controlled vehicles, a dynamically evolving front line, and crucial unit-focused gameplay that commands the tide of battle.

War has never looked so good. There is no expense spared when it comes to the quality of the battlefield. Huge fields of war littered with pillboxes, burnt out tanks and bombed houses are just a couple of the things you’ll see as you push through the authentic and incredibly beautiful terrain. Moreover, bombs that go off really do go off. You find yourself in a haze of dust and dirt as rounds impact the ground and explode. It’s horrifying but absolutely stunning. Weapons are well drawn and look incredibly good and very true to the real thing. Soldiers are dressed in authentic uniforms for their type of character and everything looks 100% authentic. Think D-day in saving private Ryan. You could really be in that playing Hell Let loose.

Audio slips a little. I’ll be totally honest and say that it was a little frustrating. Vehicles that were far away sounded incredibly close by. The audio overwhelmed me at first but as I began to settle I sort of could pick out the sounds of a round whizzing over my head and clipping a wall near me. But sometimes I wouldn’t know if shots were at me.

‘For Christ sake I’m dead’ that’s a sentence you’ll say a lot at first. But don’t panic, you may die a lot in Hell Let Loose but it isn’t entirely how you’re scored. Hell Let Loose uses different parameters to score the player and that means dying (while bad) doesn’t mean you’re doing badly. This I feel is the marmite (love it or hate it) part of the game that makes Hell Let Loose so different and unique.

Right, comms are important in a FPS anyway. Ben is forever shouting top mid one shot down the mic. But the Communication required in Hell Let Loose is paramount to success. If you don’t communicate then teammates won’t know about that squad pushing you. They won’t find out until it’s way too late and they’re well. Dead. That’s genuine too, I got killed because my squad mate didn’t call out the soldiers just past a house and I got cut down. You have to communicate. And further to that you really have to plan as a squad and then take your time knowing that you could slowly position yourself in such a way that helps take a control point, which is massive and can literally turn the tide of the battle.

You see in other franchises there’s the loss of the complexity of a shooter. You have plenty of health and a generally good idea where the enemy is without needing help from your squad. Hell Let Loose goes deeper into war and gives you a proper experience of what war actually is.

Offensive and Warfare are the only two modes available across 9 maps including Omaha beach and Carentan. And trust me. It’s all you need when you’re starting out, because the maps are so big and the control points can vary so much that really, no two battles are the same.

This is a formality really, 14 classes are available and most will be familiar with them. Ranging from Officer to Sniper and everything in between. The vehicles are incredibly cool too with Sherman tanks and the infamous panzer tank are among the vehicles available.

Look, I loved it in the end. But I only loved it when I threw away the way I play FPS games. Hell Let Loose requires a different kind of play style and it demands something different out of you. It’s a game that requires patience, resolve and most importantly communication to lead you to victory. It is the true, untouched essence of war and some players will truly love it like I came to.