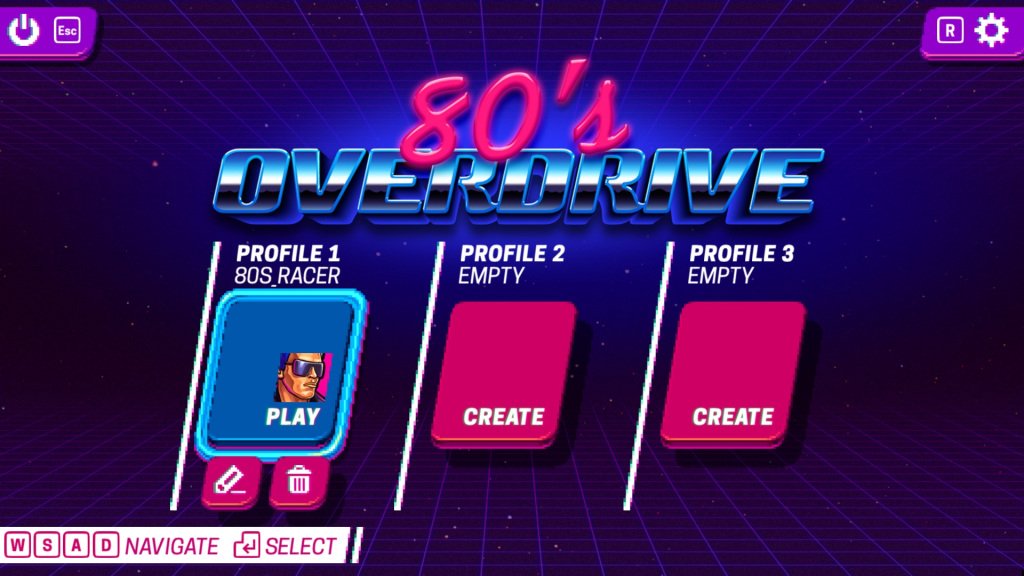 Love Outrun and SuperHang on? Then 80’s Overdrive is right up your street. Its out now and published and developed by Insane Code. i donned my leather jacket, my aviators and jumped on in

Everything you want from a love letter to Outrun is here. Rolling back drop. beautiful , bright scenery and 80’s cars that absolutely look the part. Traffic looks the part too with 2-d lorries and cars littering the highway you thrash down. Its the 16-bit era cleaned up and brought to current gen.

Audio fits perfectly, plenty of tracks to choose from all thumping synthwave that just add so well to the experience. Cars screech off the line and traffic makes noises as you barrel past. IC have done a fantastic job of squeezing every last drop of the 80’s in to 80’s overdrive.

As you’d expect with a love letter to Outrun the gameplay is rather the same. Point to point racing through traffic and dodging police. There’s added missions too adding another element to the game and at least keeping you on your toes no matter if you’re outfront or in the chasing pack.

Win races and earn currency to buy a better car. Six to choose from in total each with engine, steering and bumper upgrades to add. You can also add NOS and a radar to stay one step in front of the chasing Police whom will absolutely rip you to shreds in their high powered Lambo-esque chase cars.

Level Editor keeps you going, you create your own level then save the track to share with friends via a code. It’s not quite as in depth as you think but you can make changes to distance, amount of turns and hills in order to make yourself something a bit different. A nice mechanic to give you some freedom

Eat your heart out-Run. This love letter to a truly fantastic game is deserving a solid score for delivering exactly what it set out to do and doing a fantastic job of it. If you’ve never dabbled in Outrun 80’s Overdrive is well worth a try.